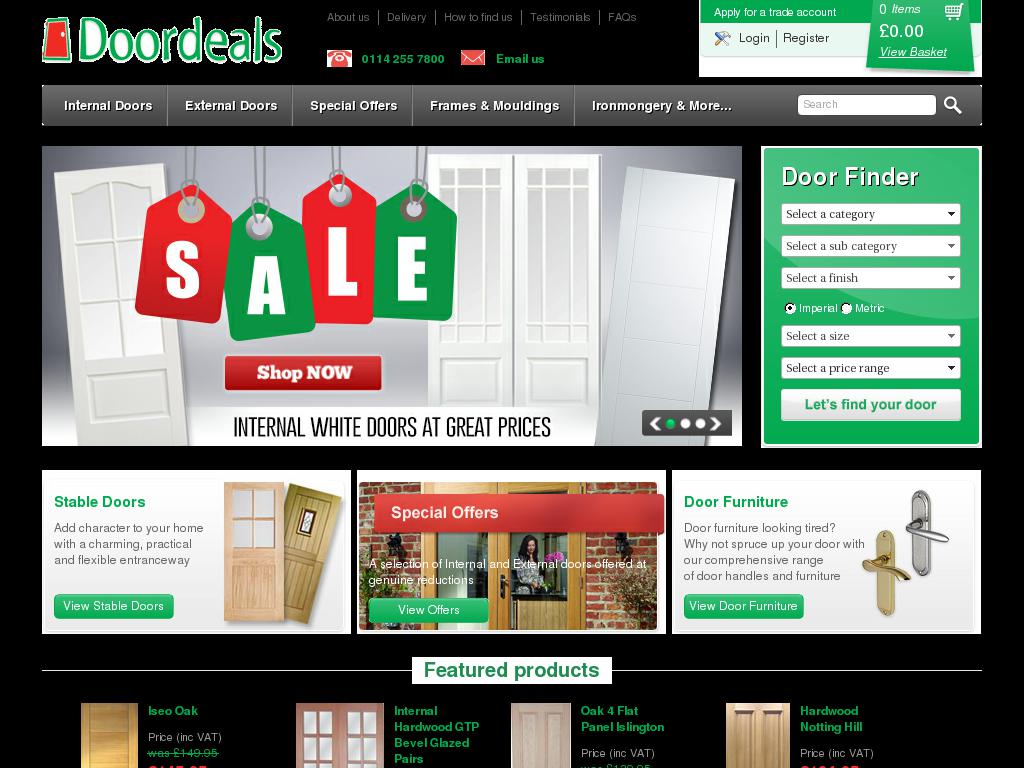 B
Ben Snow
After selling us several doors they did not have and requesting a refund, it has been several weeks and we are without our money to order elsewhere. So far they feel like a scam company.
M
Miguel
Appalling terrible company, avoid at all costs. If you have ordered a door from Doordeals, cross your fingers hoping that everything goes well. If you haven’t ordered yet, don’t. I needed an external glazed door by 09/12 at the latest. 6 weeks before, on 28/10, I had an excellent salesman over the phone called Steve who discussed all the details with me. The estimated time of arrival he gave me was 4 to 5 weeks. I made it crystal clear that I would buy the door from them only if the delivery would not take more than 6 weeks. Any delay was a deal breaker as that would have a financial impact I couldn’t afford due to other circumstances. So he made a few phone calls and checks and called me back guaranteeing 100% that the door could be delivered on time. Very importantly, he would specify in the order that the goods must be delivered no later than 09/12. Everything he said sounded very professional and convincing, so I paid upfront in full and the order was placed on 28/10. On 29/11, one month after the order was placed, and 11 days before the deadline, I phoned Steve who started hinting that there could be a tiny delay due to the glazier. He then wrote to me saying that he was going to endeavour to expedite to the best of his ability to respect the deadline of 09/12. He also told me that if for any reason he failed, he would talk to management to get me an economical compensation. That’s when the nightmare started. Since then until today (28/01) I haven’t been able to talk to him again. Different people from Doordeals told me during several weeks that he was off sick. The door got finally delivered on 16/01, that’s 12 weeks after the order was placed and 6 weeks after the latest delivery date that I could accept, as clearly specified in the order itself. But that’s not all. Apart from the delay, the delivery guy Greg hit the door 3 times in front of me. Against his van, against a tree branch and against the front of my house. This resulted in various small damages to the door. Also, the letter box arrived in the wrong finish, in gold instead of chrome. Greg took pictures of the damages and said that I should not worry because the company would offer me a discount and a replacement for the letter box. After a few email exchanges with people who weren’t Steve, I finally got an employee over the phone who told me that Steve was busy taking an order and that he would call me back as soon as possible. That’s not what happened though. A lady called Natalie phoned me back saying that she was taking over and that she wasn’t allowing Steve to talk to me. With no explanation why. It must be because the management didn’t want him to admit he lied to me or that management didn’t let him honour his commitment. So Natalie offered me a 1% discount for the damages, which is a ridiculous £20 on a £2k door that had arrived 6 weeks late, as well as a replacement for the letter box. Trying to be very reasonable, I asked Natalie for additional compensation to cover only half of the additional costs I had to incur (£220) due to the delay but she wouldn’t agree. She completely disregarded the delivery date deadline that was specified in the order, as if it didn’t exist, and told me that should I place any future orders with them they will try to recoup the costs. I have never dealt with anyone with such poor customer service and attitude as Natalie. It is clear to me that they’ll tell you anything you want to hear when they take your payment, and then ignore it all after that when it’s too late and you’re stuck as their customer. All in all, dealing with Doordeals has been a complete nightmare that has cost me much more money than expected and lots of headaches. It is the worst customer experience I have ever had, and I have handled hundreds and hundreds of transactions.

Is this your business?

Deskjock is free to use from day one to engage with your professional network, claim your account Today to enable editing and many other free features. Lean more

At Doordeals we understand that our customers are our business so we ensure that we treat every customer as we would like to be treated ourselves. We always try our best to meet your needs by offering help and advice on our complete range of internal and external doors. Thanks to many years in the industry, we have developed an in-depth knowledge and expertise in all aspects of timber doors so we will (hopefully!!) be able to answer any enquiry you may have.

Are you a business owner?

Please log into your Deskjock account, not a deskjock user? Please Register in order to verify this is a genuine submission.

Hi ,
Thanks for reviewing Doordeals Ltd

Refer Doordeals Ltd to your friends. You will get (offer), they get (offer) each time. Claim your offer now by simply sharing a link.